In the Footsteps of Lions

Posted on 22nd January 2017 by onemillionbootsteps 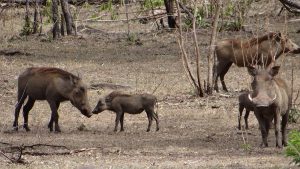 The morning dawned. Our wake up call at 6:00am comes with tea/coffee and home made biscuits. Sitting on the deck overlooking a very beautiful scene, the sound of crickets, birds and the excitable baboons reminds us today’s walk is as far from my previous walks as you can get. Already the temperature is easily 23-24 degrees Centigrade. Rucksack packed, camera and binoculars at the ready and at 6:45am we step outside. Godfrey “Gody” is waiting with chilled bottled water in carriers and rifle in hand. Our briefing is another stark reminder that we are in Selous, Tanzania. “The lion has been calling” he says. It was heard from across the area we are about to walk into. A game reserve which has no fences – we will quite literally be walking in the footsteps of Africa’s wildest. So today will not be so much about distance. It will about heat of course – a great chance to experience what the Sahara might feel like. But the biggest challenge will be breathing. Keeping the heart rate steady. And keeping your eyes and ears peeled. 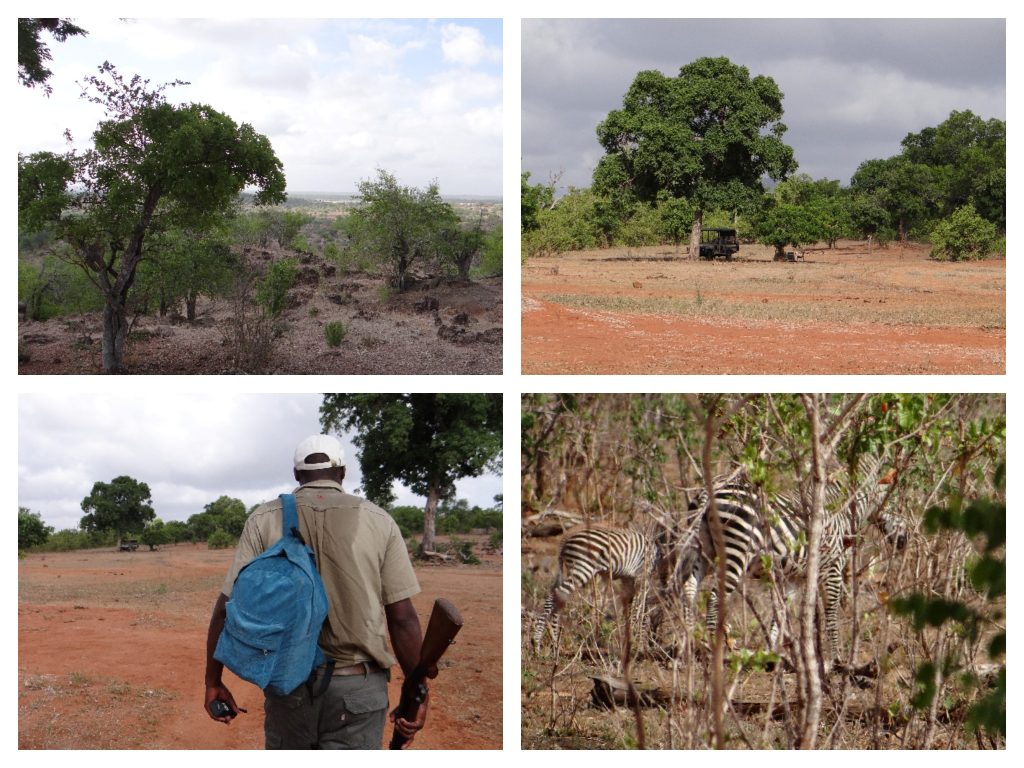 Gody at the head and Mr Smith instructed to bring up the rear because if any animal should happen upon us from behind they will seek out the weakest. Be that in stature or speed. Size matters it seems. At which point Mr Smith says “though I am not sure how I will be much protection from a buffalo”.

Periodically we stop to examine the little things. The vegetation. Which plants are poisonous. Which are medicinal. The old and now dead pieces of the ebony tree which are protected. He pops two pieces of “stone” into our hands and asks what we think it is. Turns out this is not rock at all but a very dense hardwood. We return it to the ground and I think to myself “take nothing but memories, leave nothing but footprints”.

We see how the whistling thorn acacia tree provides a home to a variety of ant species in order to protect itself from giraffe and elephants. What we thought were some form of bud or seed at the base of their thorns turns out to be a swollen thorn which is where the tree invites the insect to cohabit. Then there are the tell tale signs of the Antlion.

Our guide come scout is still trying hard to master English and Tanzanians pop vowels or a “y” into words where they don’t exist. It’s been almost 12 years since my first trip to Africa and still I can’t think of certain species without wanting to say “Aunty Lion” or “Billedy Stork”.

Indeed Simba, our daily escort from the main camp building, soon discovered that despite my love of lions, I was slightly anxious about meeting one on my walk back up to our suite each day. “Watch out for the liony” he would call as he left us at our door. I say “door” – the rooms and suites are actually entirely open at the front, and walls are only shoulder high to the rear. So anything could be waiting. The lioness had already paid a visit to our plunge pool just before we arrived. The male had taken a nap on next door’s veranda. I digress as usual, but the point being our walk also becomes an opportunity to exchange languages. It’s pretty special. 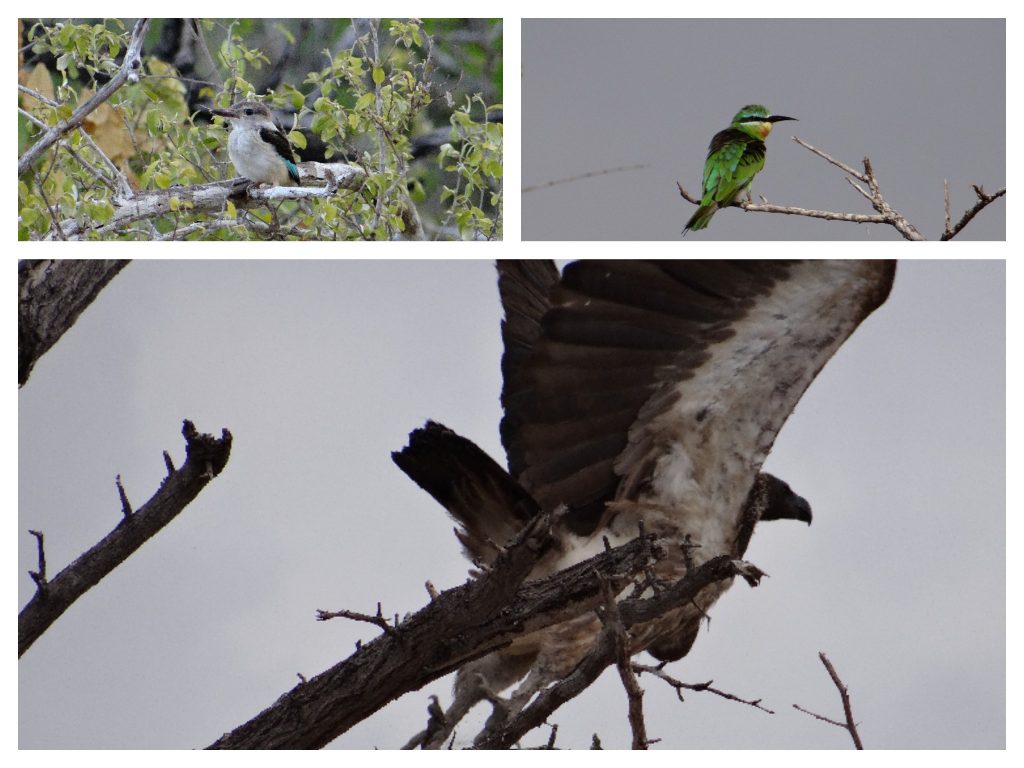 We are not more than ten minutes into our walk when a herd of buffalo are spotted in our path. They are maybe half a mile away but a walking safari is as much about looking ahead and revising your route. Buffalo are also a danger to humans. We hear it is better to stay in the open if a buffalo should see you. Then they know exactly where you are. “If you move behind a bush they will come looking for you”.

Three times more we would have to switch direction and get ourselves the right side of the wind as we come across even more. All the while looking below the bushes which are the perfect shade for all of the big cats. Or up the Baobab which provides the best branches for a leopard to rest while surveying.

At this time of the morning hippo are still grazing – and will generally head back to the river once the sun gets high and the temperatures rise. Hippos are responsible for killing way more humans than the lion. Despite their size they can cover some ground and simply snap you in two. Yet grazing quietly behind a bush you may not even know they are there. Hence for much of the walk we watch the ground. Those all important footprints, the droppings, the damaged branches tell you more about the movements of the animals. Gody can tell you what time they passed through – he bends to press a finger into buffalo dung and confirms it’s fresh. Probably within the last hour. The elephant dung tells us the elusive Tembo was close to camp last night. We learn to look much further ahead too. His eyesight is amazing.

We pass the site of the skeleton of the elephant matriarch. This old lady died of natural causes (from memory) several years ago now and her family still bring the newborns to visit her final resting place. Brings a lump to my throat as this trip has given me a whole new appreciation of this beautiful animal and the family bond. Poaching in this area now means there are no elephants more than 20 years old. Some now are born without tusks. Isn’t it remarkable how nature makes changes to try and protect a species from it’s biggest predator – man.

And so with just a few steps to go we are over the ridge. By now the temperatures are nearing 30 at least. It’s still only 9am but we are all sweating. A chance to look back at the view before heading down the other side to the lovely Simba who has driven out to meet us with breakfast. Boy am I ready for this! Because tea and a biscuit does not a breakfast make when you are burning calories, losing fluid and running on adrenalin.

We sit and chat over breakfast. We learn more about Gody and his family. Then we get onto my Sahara trek in March. A look of surprise plays about his face “So you are very fit then? I thought may be you don’t walk far?” I explain I have now walked over 300 miles since last April. With raised eyebrows he translates to Simba to quips something back to him in Swahili with a grin. “So let’s walk back after breakfast” laughs Gody. They make a funny double act (raises eyes).

So exactly three miles and just over 7000 steps takes me to a total of 790777 steps to date. As I said at the start this wasn’t so much about the distance but about the challenge associated with these particular steps. Despite lashings of sunscreen I have caught the sun on my calves even this early in the day. Now that’s something I hadn’t given much thought to until now.

I hope you have enjoyed living my boot steps in Africa. If you would like to sponsor me then I am raising funds for WaterAid who do tremendous work bringing clean drinking water and good sanitation to Africa. Click my Virgin Money Giving page to make a donation (don’t forget to gift aid).

Alternatively, I head to the Sahara with nine amazing women in March raising money for Moray Women’s Aid. Head to my second Virgin Money Giving page to donate.