Posted on 29th October 2016 by onemillionbootsteps 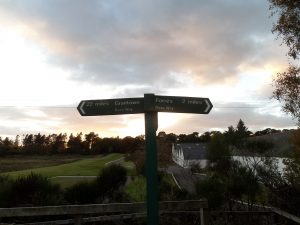 Are we there yet?

The Dava Way has been the topic of walk conversations for a wee while now. It has cropped up in various guises, as a part walk, as a split (B&B or camp midway) option, even do it all in one day. Now that would be just mad surely? I mean, you do know it’s 24 miles right? And you do know the nights are drawing in?

But somehow there was a shift in me after our Feshiebridge weekend. Could it be the “PB” of 16 ish miles and still able to tie my own boot laces the next day? Could it be the knowledge that the clock is ticking and the opportunity to get a long distance trainer in gets less as winter approaches? I am not sure but whatever it was I suddenly found myself saying to Jennifer “do you fancy having a go at the Dava Way before the clocks go back?”

And so having checked the forecast a hundred times this week, Friday dawned, dry but cool and we were ready.  With a demon “car” plan we had a cop out at 18 miles if we really couldn’t go on – now we won’t get that in the desert!

You may recall Jennifer is one of my fellow “Tartan Trekkers”. A woman who is fit and active. She walks when she could drive, she cycles – well just because she can. So she knows how to tackle a distance by pacing yourself. As we set off she asked “how determined are you to finish”. Well inside I had never been more ready. I was excited, in the right mindset and feeling relatively fit. So provided my leg didn’t fall off I was ready. Not a driven, ‘bust a gut’ mission. I would hate to fail and have to try again, yet I felt no pressure. 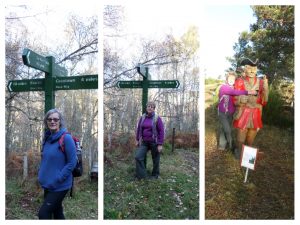 I am not going to talk you though every step and scene, because some of it I actually can’t remember, such was the easy going company – while talking ten to the dozen. I recall a time not so long ago when I couldn’t walk, talk AND breathe but there’s another thing I have almost mastered, unless it involves a mountain 😀

The Dava Way stretches between Grantown on Spey and Forres and mainly follows the route of an old railway. The countryside is varied and at this time of year the colours are simply stunning. Once past the Castle Grant East Lodge it seems no time at all before you are out in open moorland. Feel that chill. Time to don another layer, hat and gloves. It’s a long stretch. Several miles in fact and, though not ever far from the road itself, you really are exposed. Occasional wooded sections provide some shelter – strategically placed for a welcome cuppa and fuel stop. Which way is the “ladies”? 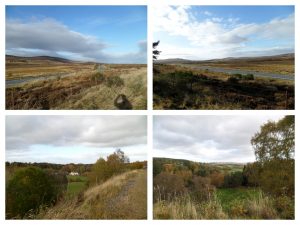 You know that saying about time flies? Well the halfway point caught us entirely off guard. And that’s a good feeling. Puts a spring in your step. Our next notable milestone was the viaduct – where we were met by Jennifer’s husband Matt – bearing coffee and cake! Is that cheating? Well actually not really….because even in the desert we will stop for lunch.

Deemed to be “about two thirds” it seemed as if we were picking off the miles without even thinking about it. Chatting and laughing, sometimes walking in companionable silence. I wish I could remember some of the funny one liners now. Like the story of someone who had said the wind turbines were designed wrong because if they spin the wrong way they drain the national grid. Do you ever wonder if life would be a lot easier if you lived inside their world? 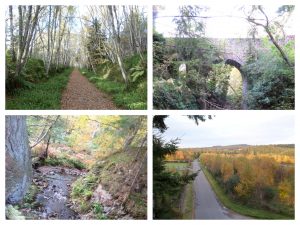 Stopping to admire the view and breathe the autumn air.  Listening to the rustle of leaves underfoot. With regular mile markers we could see the progress. I did confess my toughest section was between 14 and 18 miles, but mainly because in my head I was further on at the viaduct and I seemed to be having a groundhog day when we came to the 9 mile marker to Forres. Yet suddenly Jennifer was saying “if you want to stop now this is where would need to get off for Sluie (where the spare car was)”. What seemed like a good contingency now sounded a bit silly with only 5 more miles until we finish. And I confess to feeling a bit sad at the thoughts of stopping.

By now we had already covered more topics than the daily newspaper. Trek talking was always going to be on the agenda. If you want to know how to pack light, ask a woman who goes on cycling holidays and everything she needs has to fit in the panniers. It was also fascinating to hear her talk about her life, her work and the things she is passionate about. From protection of children to regeneration of dying rural communities, from state pension equality to supporting the campaign to get Moray a suitable Mortuary. But before you say “boy that’s a lot of heavy subjects for a relaxing walk” here’s the thing? It wasn’t. We did The Apprentice, Strictly Come Dancing, reality bake and cook shows. But at the end of the day we are two women who are pretty much strangers, brought together by a common bond – a trek in the Sahara. Our reasons and our motivation are the same, yet different. We both want to raise money which will help keep Moray Women’s Aid supporting and providing a place of safety for women and children who have suffered domestic abuse. We may each get something quite different out of this entire experience. And we will almost certainly deal with the challenges we face while there quite different too. I get my energy from being part of a group. Jennifer, by her own admission needs her own time and space too. There will be days when folk will walk alone, days when we will be gee’d on by a group who will get each other over the line. We began the day on a common topic, it ventured, it went off piste, we discovered many other common interests along the way, we even saw some things from different angles.

At 19 miles the hips and leg joints were beginning to make their feelings known. Thank heavens for drugs – anti-inflammatory and a banana – because I was damned if my quip about crawling to the end was about to manifest itself. 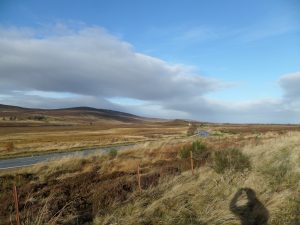 Dallas Dhu distillery, no longer operational but now a museum was our final opportunity for “if you want to phone from there I can come and pick you up”. We didn’t even stop to ask each other the question. It’s kind of nice when after this distance together we already know. My adrenalin was flowing, I suddenly felt I could skip or quick step the rest of the way. In fact I might had my heel not suddenly gone pop! Literally – a blister – out of nowhere. Ok, note to self. Change wet sweaty socks half way next time. Sorry is that too much information?

That final two miles felt long. We were both noticeably quieter, stopping only to admire the impressively large cattle in the field. “Wow look at the size of them, what do you think they are?”. Silence. Jennifer is thinking. Then she quietly says “Cows, Marie”. God love her :). The day had started almost eight hours before with our demon car plan, and was now about to end. The whole day we passed just three cyclists, a lone backpacker and a couple of dog walkers. Oh and Matt who came with cake. He is a diamond!

But now we were there. In Forres. There was a slightly stunned silence. We had done it. Actually – we had only gone and done it! Well done us! Time for a celebratory hug and selfie before the final walk up to Jennifer’s house to get my lift back to the escape car at Sluie (remember that?). Hang on a minute, how far is your house?? Ok, big girl pants on, you can do this – you have just done the Dava Way.

52,484 steps completed takes me to 626,580 steps to date and I owe a massive thanks to Jennifer for being just a fab companion and helping me smash my own personal best! If you would like to help me reach my goal of One Million Boot Steps while giving a little to one of two charities then head to my Virgin Money Giving page and choose your charity.

Epilogue: Someone asked me today would I do it again. Had they asked me at 19 miles yesterday I might have looked at them like they were daft. Today however, fueled with a massive sense of achievement for both of us, I said to myself “hell yes”…and before I knew it I had signed up to rejoin the next of the trekkers to try and Defeat the Dava.