Posted on 21st August 2017 by onemillionbootsteps 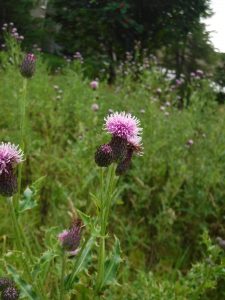 Why does my head insist on trying to drag me away from the moment. The fun. The beauty? I know – mindfulness! Except I just don’t know how to do it.  I thought it was about thinking about things which make you happy. Taking your mind off it. And then a book I got said it wasn’t. So I think I need help to practice it now. Last week I experienced yet another trigger. Sat in a room of people, yet despite making some progress I still walked out questioning my worth? Apart from being a handy grafter do I bring anything else to the table? Why do some appear to look past me rather than understand why inside I am sobbing. And so those thoughts are the thoughts which have continued to unsettle me. I have chewed it over and over until I can’t sleep. And when the fight goes all that is left is flight. But you can’t keep running from the pain…

Meanwhile my poor Mr S has to deal with me keep going over and over the same questions. We have had a lovely weekend, decorating, getting creative. It worked to a point. Is that mindfulness? I have no idea. But I do know that while my hand wafts that paint brush my head knows it can multi task! Damn my head! So today we decided to head to “that Loch we can see off the A9 near Dalwhinnie”. We must have travelled the A9 100 times over and always remarked how it would be lovely if you could walk out to that loch. Well guess what? It’s called Loch Ericht (Loch Eireachd) – and you can.

Ben Alder Estates offers a made track along the north west shore of what is the tenth largest freshwater loch on the border between Perth and Kinross and the Highlands Council areas of Scotland. The loch is over 14 miles long and has a surface area of approximately 7 square miles. It is part of a hydro-electric scheme and is dammed at both ends, with the southern end linked to a power station at Loch Rannoch (also on Mr Smith’s hit list this year) by the River Ericht (thank you Wikipedia). Loch Ericht is also surrounded by a number of Munros – but they are not on my wish list. No need, no desire, no wish. I love water! I am happiest by water.

The day had promised good visibility. Hmmm, interesting interpretation. But that didn’t spoil the enjoyment. The views are still pretty amazing with a loch you cannot see the end of. All the while Mr Smith keeps saying “next time”. And “when we come back there will be snow on the tops”. We will see. Meanwhile back to today, it’s a day which was kind of a “lens off”. Mr Smith with his latest addition to the camera camp. Me with the trusty waterproof (well you never know), sand proof handy Fuji. Well it was good enough for the Sahara. 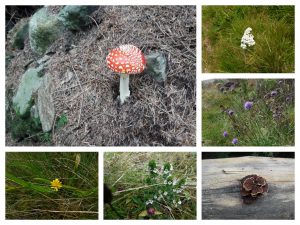 So today I was determined to notice the little things. How many thistle varieties are there. I didn’t do Latin, they are thistles – ok? And all in this lovely glen? Tall pink ones. Medium lilac ones. I even spotted the smallest cerise one, but foolishly thought “I will get that photo on the way back” only to never find it again. If ever there was an example of why you should seize the moment that was it. I decided to use the thistle as my focus. If my head was wandering, the thistle would bring me back to the moment.  And there were enough of them there to do that :D. We leave the gatehouse and estate office, pass An Tochailt lodge and then follow the well made road track. The track follows the edge of the Ericht Forest and looks down on the loch with tantalising views of the “big house” we know to be five miles away. Mr Smith tells me from there you can head into the hills to a bothy another 4 miles away. Easy tiger – we still have to return the way we came, remember.

It’s actually a busy estate we found, with regular estate vehicles passing up and down between the various properties. We had serious “maintenance yard” envy too as you would happen upon more than one well disguised area with all manner of stone, ridge tiles, gravel, sand, “poles”. Evidence of the recent restoration works on all the properties and clearly nothing going to waste. You know? The kind of “it might come in handy” storage.

Lunch was taken perched on a rock overlooking the loch with views up and downstream. No deer to be seen today and the light sadly not allowing the heather to reveal its true colours in the way we had hoped. But we were now over five miles walked and guaranteed the same by return – albeit via a slight “low road” detour which turned out to be underwater with recent rains turning a hillside spring into a torrent! Well we are not turning back. Time to test how waterproof these boots are. 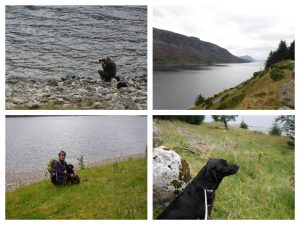 Mr Smith and I (and Keara our eldest lab) are generally quiet walking companions. We always have been. Sometimes we walk together. sometimes apart. That in itself means the mischievous crew can take over my mental ship – they are like mutineers! But I tried really hard today to keep my captain out of his bunk so he stays in charge (if you get chance to read any of Emma Bell’s work, she explains this brilliantly). As a result I found myself thinking less about what happened last week, last month, last year, last decade and more about the wonderful flowers which live by this roadside. I can hear the plane on route to Inverness airport. I listen to the wind in the trees which sounds like rain. And with time my captain steers my thoughts to 2018 and the plans I have. I think about Jennifer who is away cycling just now and wonder how far she is now. I hope to be completing a brand new challenge with her and Elle next year. I imagine how much water we will need to carry and how warm it will be. I imagine what the sounds will be like. And whether we need to find a supply of the magic cool cloths 😉

I think about Rosie and our eager plan to volunteer in Africa for a spell. I think about Pauline. Ok I confess I was mid “pee” when a convoy of cars came by and Mr Smith says “imagine if that had been Pauline?”. See, he has read all my blogs :D. I finally laugh!

I think about grizzly bears and whether I am brave enough to go photograph them (and write about them) in Alaska.

And finally we can see the gatehouse again. 10.89 miles in total. Hey! I am not having that. I channel my inner Kirsty and continue to walk until “Freddie Fitbit” gives me the full 11 miles he has promised me. I passed a plumbing and heating engineer who gave me a cautious greeting as I declared “I am not coming back until this reads 11” and marched on. He maybe thought we were having a domestic :D.

I began today in a positive mood. I dipped, I swayed, I thought – a lot! I captured some memories in images. I made plans in my head……..and made a mental note to pack dog biscuits in my rucksack for next time 😉

For those who haven’t pieced it all together yet, I am still walking. This year I decided to switch my fundraising over to a mental health charity. I know I battle with my own mental state and have to work hard to try and keep things in perspective. I have seen first hand the effects, and lost friends along the way to mental health. And that is why I am supporting SAMH with every new boot step I take. At 170,000 boot steps since April, I am way short of where I was this time last year but I won’t let the challenge own me. Walking with friends, with people who were there when I needed them are what’s got me through one of the toughest periods of my life. And so good company is my main motivator now. And as a result, next year sees not one but TWO new challenges, each very different to the Sahara…but more about that in the autumn.

Meanwhile if you would like to help someone with mental health then why not support SAMH?