The Whole Six Harbours, Seals and All

Posted on 30th April 2017 by onemillionbootsteps 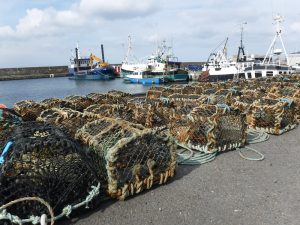 Ok I confess I am not one for organised activities. By that I mean hoards of people, random people, strangers, corralled into taking part in something. Anything. But way back we often talked of doing the Six Harbour Walks as a training day but never made it. Weather. Diaries. Opposing preferences. “How far?” Each played a part and so the Sahara Trek came and went and we never did it. So here we are, back in the UK climate and missing walking with good company, by the sea. And then the Six Harbour Walks made a timely appearance. Time to pull on my big girl pants and face my nemesis. The organised walk!

Tabled as being around 15 miles it starts at Portsoy and finishes at Buckie, taking in the four more harbours Sandend, Cullen, Portknockie and Findochty.

First challenge. A shared bus to the start. My inner self did weep a little at this idea. Would I be among serious walkers? Walking poles? Proper walking gear. What would we look like with our kilts and leggings. But guess what? A coach load of folk all wanting to walk. Some with dogs. Some with children. A blind man with his guide dog. I guess we all shared two main motivators. To walk by the sea (who doesn’t love that) and to raise money for local causes driven by all the good that the Rotarians do. It’s all very humbling really.

So we get off the bus and the first harbour is Portsoy. It was all a very low key start. What? No start line? No timer? No – on you go ladies. Whenever you want to. Not a race. Enjoy!

Looking ahead we could see a snake of people walking. That in itself would prove to be a fascination as harbour by harbour that snake would segment until eventually we could see nobody in front (or maybe one or two). Where do 400 ish folk go? We would pass some, leave others behind. “Loving the outfits ladies”. “Tartan Trekkers?”. “Sahara? Have you been or on your way” And so the chat would unfold. When someone had suggested “shall we wear our kilts?” it sounded fun. I can’t even remember who said that now as our messages go off piste more than a black run skier in the Chamonix. So who would know putting on the entire gear would bring about this response. Even the photographers along the way were captured (see what I did there) by the MWA Tartan Trekkers. I can only apologise to the folk waiting patiently behind as the boy at the top of Tony Hetherington’s giant man made steps between Sunnyside Beach and Cullen aimed his lens and posed shots at four happy women who to be fair were just glad to be out walking, together, in kilts! 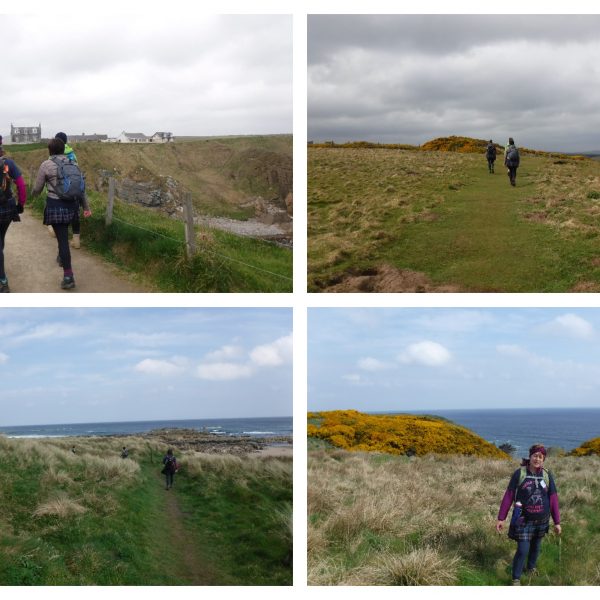 And so the day unfolded. Each harbour we reached it seemed we were the noticeable “milestone”. It’s a big hats off to the teams at each check point. Clickers and punches and a big sheet of highlighted numbers made sure everyone was passed and nobody in difficulty or lost en route. The first aid/medical teams leapfrogging up the route giving words of encouragement and swapping stories each time we stopped. It’s a wonder we are home now as we do like to talk!

But today was a whole lot more than that.

I love the coast. Give me a choice and the sea will always win. I swear there are always a few more miles in the tank when the sea rolls and urges you on with it’s sounds and its smell. Today the gorse was in full bloom. We began the day in cloud (and wore a LOT of layers). But that didn’t stop the golden gorse trying its hardest to bring sunshine to our day. And as for that heady scent of coconut? Well that has to spell summer surely. The acre upon acre of wild primrose left me a little envious of being unable to get more than one to naturally settle in my own Cairngorm garden. 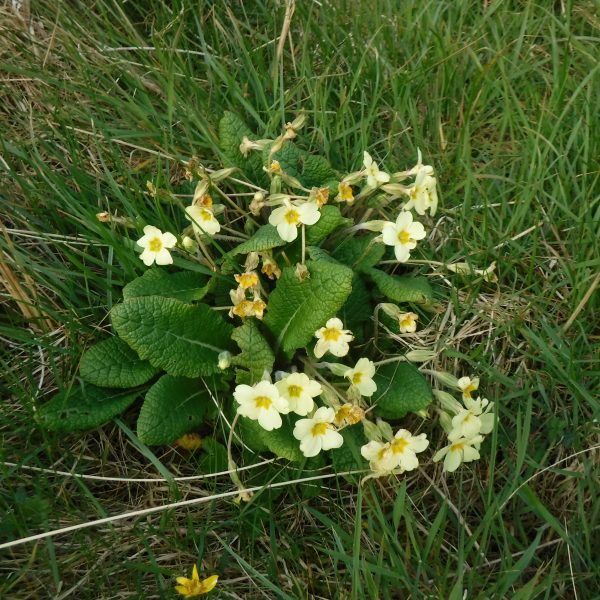 Meanwhile a fabulous lemmony backdrop of rape field at Findochty shared it’s sun with the sky. And so the sun got the hint and out it came. The sea throws up its salty spray as it hits the rocks. Then gently sends in its rolling waves in comparison. The jagged pillared rocks and the caves entice you with historic stories and erosion you wish you knew. The seals bobbing in the bay as we neared Buckie must have wondered why all these people walked heads down oblivious with their “canvas turtle shells” in shades of red, blue, green, yellow, pink, black didn’t give them another glance.. We saw you! But don’t be sad, others maybe didn’t as the finish line was almost in sight. Bring all those things together and lock them in with good company and I declare that my perfect day. 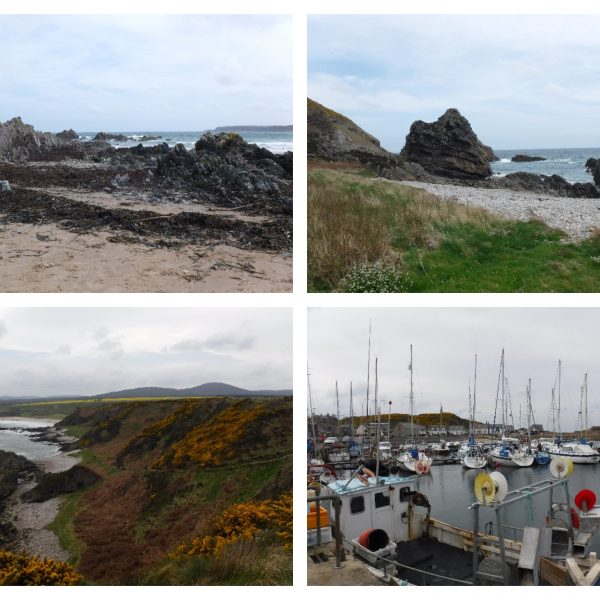 And then today was also about good friends wanting to spend some uncomplicated time together. Breathing in salty air. Laughing until your lungs won’t fill or your bladder can’t hold on. Ok we would count steps and compare miles (old habits die hard). But we had no agenda. No target. We would laugh at discovering “Jenny’s Well”. “That’s great news about Jenny!” Think about it. We would talk lots about the Sahara, our best bits, our not so great. We would swap snacks. And Compeed!  But mostly we would talk about needing “more of this in our lives”.

But the other lovely thing about today was the folk we met along the way. I take you back to the start when I was a wee bit apprehensive of this whole group walk thing. But today we met people we knew, people we didn’t but who wanted to know, folk who knew us and folk who knew of us. Folk who met us once and often and still laughed along with us. That says much about our year long challenge and we, as a group, should be enormously proud of that. Indeed we should never forget that.

It was an especially proud moment to be able to share that we have raised £25000 because a tight group of ten determined and passionate women who took a rather crazy and scary decision to head to the Sahara to trek 100km (108km actually) for a common cause. Today was a whole lot less at 15 miles but in terms of pride I think that measures up to a whole Sahara.

A massive thanks to the Rotary Club of Buckie and all their band of volunteers today. From checkpoints to first aid and all the activity in Buckie. Thank you for making us feel very welcome.

Today we opted to raise money back to support the Rotarians who have given much support to Moray Women’s Aid. If you have enjoyed the blog and can relate to a little of it then we would be thrilled if you could help us give a little back through https://mydonate.bt.com/fundraisers/tartantrekkers