Ten Things You May Encounter on a Trekker Walk

Posted on 28th March 2018 by onemillionbootsteps 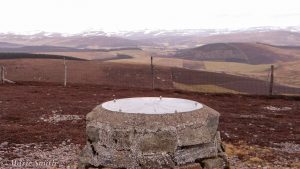 Hey, did I say? I am in training for the Rota Vicentina in Portugal. Ok, not the whole 450 km. But still a decent 110 km or so.  In exactly one months time I will have my bag and rucksack packed. I will have cleared Boots out of Compeed (again). I am going. And I have done hardly any walking since booking this trip. I know, I am so lazy these days.

Anyway, I am not here to talk about that. Today was declared a “walk day”. Weather check? Yes, looks fair. Well, it’s not going to rain. Not before 2 pm anyway. Honestly, the forecast said so ;). Decision made – Carn Diamh it is. Jennifer has never done it. I have done it only twice. Despite it being less than 4 miles (as the crow flies) from my doorstep.

And it turned out to be a day of surprises. Here are ten things you might see on a walk

Seriously Jennifer. Have you really just rolled up in the same colour fleece as me? She had. Even down to the manufacturer. They were probably the same age too I expect. Ah well, they say great minds think alike.

This walk always gets me on the back foot. It is a steady pull for the first section. It steals your last breath. Walking and talking is not recommended. Remember you need that breath! Jennifer is usually the pace maker but the terrain made for much slower going. More of that later. Meanwhile I managed that final pull to the top in four! Come on, that’s not bad. Remember when I had to stop every 10 paces the first time I did this?

Did you ever hear about the Beast from the East? You might not have done. It wasn’t mentioned much. Hardly at all in fact. Well, in case you took yourself to the moon for the last month or so you will probably know it snowed. A lot. Shed loads of the stuff. And living at 1000 ft above sea level, if it snows,  we are fairly sure to get some. We did. Get some. About three foot of the stuff in fact. But it’s all gone now. So that’s good.

Except somehow my brain didn’t compute that Carn Diamh is over 1800 ft high. 1866 feet to be precise. We were doing really well. Congratulating ourselves on the weather when suddenly we hit it. Laying snow at around 1300 ft! Not everywhere. Oh no. Just conveniently right across our path. A wonderful layer of snow completely hiding the track beneath. With giant’s footsteps imprinted. See, we weren’t the only daft ones. We keep going. Picking our way over it, round it, through it. Up to our ankles, sometimes to our knees. There was more than one point where I thought “this is just silly now”. Maybe we will just hit the reverse button. But it was only on the path. Everywhere else was clear. So why had this not thawed. I prayed it would vanish for the final ascent. I had a vision in my head of a snow capped Carn. You will see from the pictures it wasn’t. Does that count as two surprises? 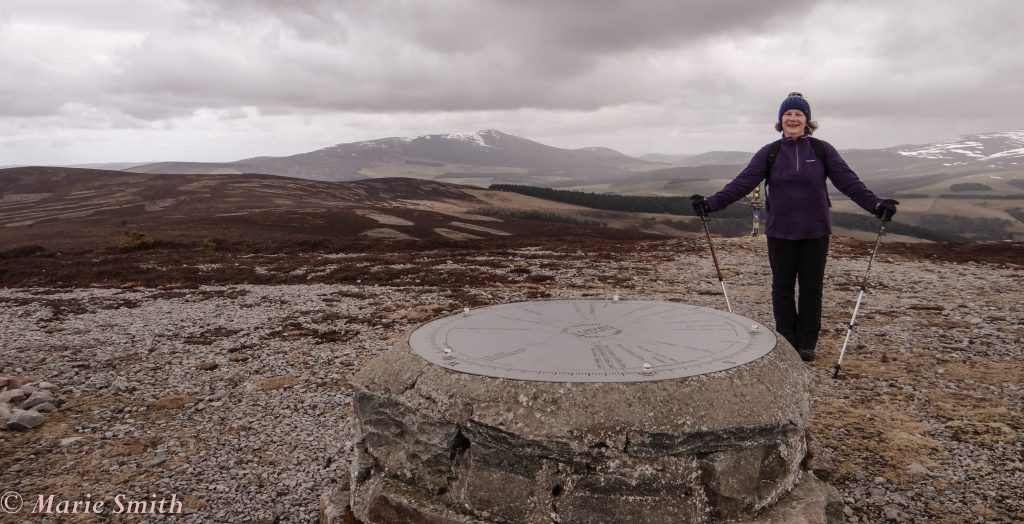 Snow melts. It drains to a lower level via the path of least resistance. “Path” being the operative word. People’s boots make mud. Enough said! “It’s not like this all the way”. It’s true. It isn’t – normally. I said it more than once. “It” clearly wanted to prove me wrong. With wet squelchy feet we ploughed on. Mmm, Jennifer is awful quiet……

I know it’s already on the list but it’s worthy of another mention. Because timing is everything. Right? “Let’s stop for food and a coffee”. Rucksacks off, a suitable log to perch on and I am happy. Ah, I can see, you are ahead of me? Yes, you guessed it. It started to snow. A whole hour before it was forecast. I mean, what’s going on in the world?

What do you do when you discover a rather larger pregnant ewe is rolling around on her back? Well you roll her onto her side and try and help her onto her feet of course. So what do you do when she rolls right the way over and is back where you started. You have another go. Three times I did it.  I even tried to wedge myself under her back to stop her barrelling down the hillside. Did you notice the use of the first person singular? Where was Jennifer? Oh she was really helpful. “Be careful” she says. Thanks, I will [rolls eyes].

Anyway we are still miles from anywhere. I can’t fathom if she is about to lamb. I mean, I am no expert in these things. Though I did once spend half a day at a farm where they were lambing. But my job was just to reassure the ewe and stroke her forehead while the farmer dealt with the sticky end! So picture this. Two women dressed in the same fleeces, like something out of League of Gentlemen, peering curiously at a Ewe’s nether regions. While she stares back at us indignantly. Times like this you wish you had Wifi so you could get the manual out. We finally decided to tell the farmer at the next available location. Hold that thought…

Hurrah, Jennifer spots a tractor. And a truck. About half a mile off. We will pass it so that’s all fine. Ten minutes later we reached the field they were in. Shoot! How far up the hill are they? Ok, I said I would help that ewe. I promised her. Deep breath, I am going up.

I eventually reach them. Heaving and spluttering. “Are you lost?”. I try to speak. They try to piece together what I am trying to say with the last breath squeezed out of my lungs. “Dead?”. “No….puff puff…not…puff puff….dead……heave…..distressed….”. Ok, you get the picture. I am going to save you the detail but suffice it to say they agreed it didn’t sound good. Then somewhere in that moment I seemed to agree to taking a detour to let the farmer know. Ah, did I not say? Oh no, these weren’t farmers. They were fencing contractors. Very knowledgeable fencing contractors. Fully sympathetic and appreciative fencing contractors. But with no plans to get in their vehicle and drive with blue flashing light to save the ewe. So back down I go and break the news to Jennifer [did she just roll her eyes].

So, we reach the farm. It’s only another half mile round. I think. I was about to head into the yard when we were told in no uncertain terms to go away. At least I think that’s what they said. Border collie speak you see. I couldn’t quite be sure. But the baring of teeth and the cheeky nip to back of Jennifer’s calf did seem to suggest we might not be welcome. And just in case we didn’t get the message, reinforcements came. Three rather angry border collies escorted us as far away from the premises as possible. I tried to explain to them “there’s a sheep you see, it’s in distress”. Grrrrrrr, bark, snarrll. “Ok ok. I give up, you explain it your Dad when he gets home”. At least I think that’s what Jennifer uttered.

And so, making a mental note to avoid looking at any more sheep, just in case, we made the final drag up the hill to home.

Oh, and I almost forgot to say. Then it snowed……

The tenth surprise? Ah. I have a confession to make. There isn’t one. There is no 9 either. Well unless you count the grouse which got up right in front of me and nearly gave me a heart attack? No, there is no 10th. I just read the other day that lists like “10 ways to…” make good blogs.