Just Around the Corner

Posted on 16th April 2017 by onemillionbootsteps

And we’re off. Garmouth to Covesea and we opted for a car at each end. I start to think about the bits of the Moray Coast Trail I have completed and realise – I have only got as far as Spey Bay. I did walk to Spey Bay from Fochabers (and back) last spring. I had only just begun my training. It was an unseasonably hot evening and a relatively short time window. The result was a very sore back from a new airflow frame daysack and a pace which resulted in my boots giving me toe trauma. The frame was soon detached and now lies abandoned in my spare room while the toes are doing just fine now, thanks 🙂 But that was a tough walk and one where I couldn’t even put my own socks on for a few days. So it’s no wonder I have tried to block that walk from my record 😀 But back to today and it’s the start of my completion of the Moray Way. And to do that I need to start today’s walk from Spey Bay (or at least walk from the old Railway Bridge). So Spey Bay it is and that’s us driving another how many miles? How far round is that drive??

Leaving Spey Bay behind we set off in the direction of Garmouth, following the river Spey, near its mouth at the Moray Firth. Almost immediately I am distracted by a large bird taking flight on the edge of my vision. Flashes of browns and white and a big winged sweeping flight. It was literally a split second and then it was out of sight heading for the Spey. For a fleeting moment I wonder if it could have been an Osprey? I conclude it was more likely a lapwing.

The path follows the Spey before reaching our crossing point, Spey Viaduct, a the lovely old railway bridge. There are bluebells out already. Sitting alongside a lovely purple flower which appears like a phlox (I wish I knew my wild flowers). We continue along the cycle track until we reach the point where the route takes you through the village of Garmouth. I have driven through here often on my travels to and from meeting wedding couples and venues. But walking these places gives you a new perspective. Such a mix of houses. Lovely old stone two storey character houses to more typical pretty coastal cottages. The Garmouth Hotel looks inviting and more than once tries to tempt you in with a promise of coffee by the Speyside Coffee Roasting Co.  But heavens we have only been walking half an hour, we can’t stop this soon.

Jennifer is my walk buddy today. She has introduced another of our fellow MWA Tartan Trekkers, Elle, to her other love. Cycling. Last weekend they had their first trip out. The stories which followed kept us occupied. From gears to pampers (don’t ask) to sense of direction (or lack of) to the realisation you reach your landmarks quicker on a bike. Entertained by the stories, I really don’t remember much about the Kingston section except the pretty yellowhammer. At least I think that’s what it was because my bird identification is about as accomplished as my wildflowers. But soon we are following a trail which is just a little inland but with lovely views back over the harbour. Time to take advantage of a perfectly positioned bench for an early sandwich. Maybe we should have stopped for that coffee and scone after all :D. Though low energy levels would rear its head more than once today, we would come to discover.

We carry on and soon join the trail as it runs parallel to the coast. We were lucky today as the absence of the red flag meant there was no live firing on the MOD range. So that meant we could complete the next section of the walk alongside the coast. I say alongside, you are not actually right by the sea. Though we could hear it crashing away. And in time we would begin to see it away in the distance as Lossiemouth eventually came into view (and continue to play with your sense of distance). But we were glad of this bit of shelter today on what could have been a cold and windy day otherwise.  The path nestles below the pebble/shingle bank and follows the line of the tank traps. To the left is a dense area of vegetation. The colour here just now is quite eye catching. Everything is greening up and the gorse wearing it’s gorgeous yellow coat, backed woodland. The path passes either side of the traps from time to time – and looking up to the left are the regular (yet irregular) concrete “lookout” buildings. “Carefully disguised” with roofs of grass and gorse.

Underfoot this section of the path is actually quite hard going. Pebbles line the route pretty much with the occasional sections of narrow sandy path cut into the “green” offering a welcome rest for the soles, ankles and knees. The effects of the high tides and stormy seas are also ever present. Entire tree stumps with sea worn roots litter the early part of the trail. “Where have you come from? How far have you travelled? I wish you could talk”. The almost obligatory lobster pot, rope, buoy and net are there too. It all serves to remind you the sea is a strong force, discarding its own “I don’t need that” litter over the pebble bank. Tearing away a couple of tank traps from their foundations, tossing them aside as it heads back out.

We began to imagine the entrepreneurial opportunities for this stretch of the coast. Those lookouts could be converted into state of the art beach huts or self catering lodges perhaps? Pure fantasy of course but imagine opening up this entire area creatively. With easy access from inland it’s clear this area is used a lot for self entertainment. Graffiti covers some of the structures entirely. Letters on the tank traps spell out the name of someones favourite band. Ample litter the evidence of the activities which keep these folk occupied for at least a wee while.

Look Out? What Look Out?

As we emerge from our “tunnel” Lossie looks as far away as it ever did. Groan. The joints are hurting a wee bit too “my knees are not loving these pebbles”. You have to concentrate on where you land your feet and so conversation becomes patchy.

But despite thinking we would never get there, eventually we did arrive on Lossie beach. And so the slightly romantic notion of the sea’s litter would be replaced by the reality of human litter. Car tyres. Fast food containers and cups. The pram with the missing wheel? One could imagine the story as the decision was made to leave it in the soft sand and carry the bairn home. And that was when those energy levels began to sap again. While we both love the sea and were hankering after some sand, we laugh as we think how we tried to use Lossie dunes for training for the Sahara. Don’t get me wrong. They are lovely. Reminiscent of family holidays in Prestatyn. But the reality of Africa’s dunes was very different to those of Moray. “How did we ever think these would help us prepare”. 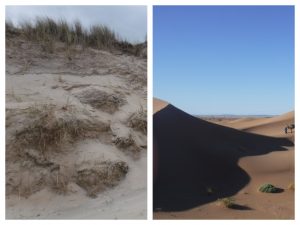 That’s not a Dune. This is a Dune

The final mile or so down that beach was pretty much completed in silence. Lossie is still not getting any nearer. We can see the spray off the sea and it’s nice being right by those waves. But hell these knees are hurting now. Both of us are nursing an issue today. Jennifer’s knees gave her trouble before the Sahara trek but have been behaving until today. Mine? Well I have had the odd ache but not enough to stop me. But this week a ten hour marathon session at the ironing board (I am an event stylist/dresser – it comes with the territory) resulted in my first need to reach for a knee support.  503 miles these knees have supported me on my challenge this past year and I bust my knee stood ironing. The irony is not lost!

The energy levels were low (have I already said that?). “I am thinking pot of tea and phone a taxi to Covesea” says Jen. Now that never happens in our world, so that’s a measure of how tired we both feel. Calm down! No taxi was called. We get it. Doing The Moray Way in the car doesn’t count. Ok we did stop for tea and a scone at The 1629 but, energy recovered, we deemed Covesea “just round the corner”, put our rucksacks back on and headed off.

The route follows the harbour road out of Lossie and then behind the golf course and the large houses at the Stotfield end of the town before we opted to take the beach for the final leg. That sand will always beckon. And add that to a rolling sea and you will have us both hooked in. The lighthouse at Covesea teases you a little too as it pops in and out of view. The weather has turned too now so it’s waterproofs on and head down. The RAF base are flying though, treating us to a welcome air display as we walk along the sand. 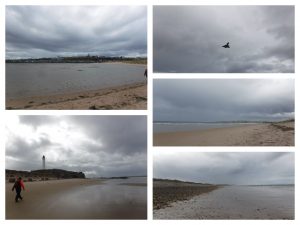 Beneath the lighthouse we take the path inland signposted Covesea (High Tide route). Following the stone wall it looks back over the holiday park and, beyond, back into Lossiemouth. Ahead you look right onto the base with those three “flyers” now parked up for the night. The view here is quite something. The recent fires at Covesea are also very much in evidence. The old stone wall seems to have provided a natural fire break, which must have been a relief for the caravan park just a few yards beyond. From here you can continue the Moray Coast Trail by following the perimeter wall back around the lighthouse. But this is our “destination”.

Our walk began at 11:05 am. We finally climbed back in the car 5 hours 48 minutes later having walked (“My Fitbit says”) 13.2 miles, stopped for two lunches and afternoon tea. I never look at my average pace. For me walking is not about how fast, though I do get a sense of achievement when I see how far. I walked as a group of ten MWA Tartan Trekkers who each trained the best part of a year to walk 100 km in the Sahara in last month. Our fitness levels were all very different and we can all recall a time when 10 miles was “maybe too far for me yet”. Now we laugh as we say “if it’s not 10 miles it’s not worth putting my boots on for”. But now, more importantly, we are walking for pleasure. For the good company, the laughs and sometimes the need to unload a little after a “hard day at the office”. And so, despite the aches and the tiredness, we still both declared this an enjoyable walk. A varied route which makes you think about more than the path itself. And of course we saw some lovely wildlife too.

So what next? Fochabers to Grantown on Spey (The Speyside Way section of the Moray Way) has bits we have each missed. All we need now is a couple of spare days or three to plan it in.

This entry was posted in Moray Coastal Trail, The Moray Way, Walking. Bookmark the permalink.