Footprints in the Sand

Posted on 16th August 2016 by onemillionbootsteps

After yesterday’s planned climb to the top of Lochnagar was cancelled due to high winds, the location for what was to originally be Day 2 was thrown wide open. No longer tied to trying to find a suitable distance and terrain suitable for lower fitness (or tired mountain legs) in Deeside we decided to head for the coast. Susan says the sea makes her happy. Me too. In fact Mr Smith will recount many a day trip where I have literally plonked myself on a rock, often camera in hand, to watch the sea in motion. The choppier the better. No matter what stuff is happening inside my head, she helps me unravel it. The sea that is! So today’s destination is one which has been on the agenda a wee while for an evening walk, though today’s timing probably puts into perspective why we would always struggle to fit it in. Nairn to Whiteness Point and back.

So the morning dawned reasonably fine. We left Nairn in sunshine passing families enjoying the sun, some kiting, some exercising their dogs, some simply sitting out and enjoying a morning coffee. But Scottish weather being what it is we were no more than 20 minutes in I guess before the heavens opened. As Sir Terry Wogan often said “you couldn’t make it up”. There we were, Susan and I dripping wet. Head to foot – and hadn’t been anywhere near the sea to fall in. The day could only get better. 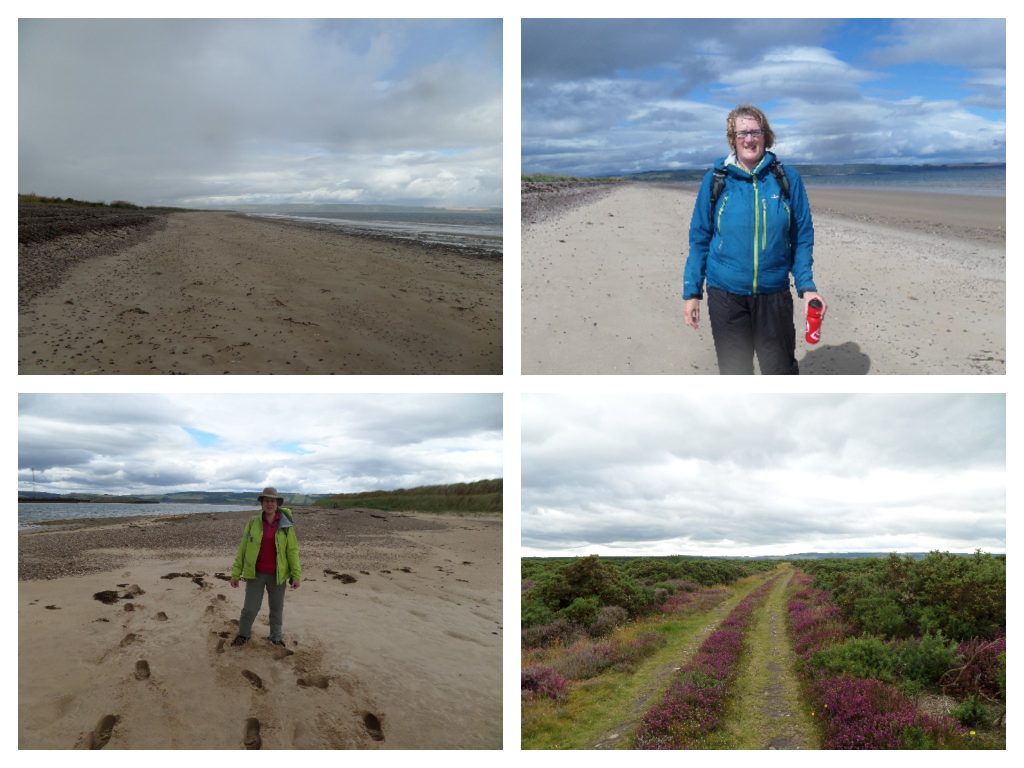 It did of course. Luckily the temperature was fair and a wee sea breeze, while it brought the rain, it soon took it away again and made amends by drying our trousers fairly quickly too. Time passes when you talk. And time passes when you stop and breathe in the sea, look at the “little things”. I have never known a section of beach with so many colourful pebbles. From pinks, to reds, even orange. And of course all the “fossilized” sea creatures washed up and left to dry on the sand.

Once at Whiteness Point we turned inwards to the deep inlet overlooked by the huge construction site. Long since abandoned now but once the scenes of big employment in the area and clearly built to serve projects across land and sea. A relaxed lunch and then it was a return. Having taken the beach for our outbound section we were left with the choice of retracing our steps or taking the inland route.

With a WalkHighlands guide in hand we attempted to work out the “alternative” return route in reverse. Have you ever tried to do that? Now that seriously tests your lefts from rights. Hilarious. But we did it. Okay, we did have to slip through the clubhouse grounds having got ourselves the wrong side of the course. But I don’t think anyone noticed – much. Relax! I keep telling you, we’ll have camels to follow in the desert, we’ll be fine?

Talking of deserts though, this walk really did test the joints and muscles for a bit of serious sand walking. We had compacted sand, soft spongy sand, loose sand. Those pebble embankments make for great test runs of a sand dune. One step forward, three back. Then there was the moment we both stepped off the grassy bank into soft damp sand and lost at least 2-3 inches in height. It’s only now I have sat down to write do I realise how very different that kind of walking is – it’s slower and it makes those joints and muscles work harder. Best get a few more of those on the agenda I think.

Billed as a 10.25 miler you would expect two reasonably fit people to complete it in under 4 hours with a lunch stop. Total time was in fact nearer 5 hours. Not that we were counting. Today wasn’t about how fast or even how far, just about healing and walking and chatting.

Stopping to admire the houses and the restored “lone” fishing bothy (now holiday cottage). That’s the beauty of having an Architect as your companion, they know who has built what, onto where! And they spot an architectural feature a mile off. When it’s fun the steps will come – and when you reach the end and kind of wish you didn’t need to go home? Well, that’s the sign of the best kind of day – for me.

25426 steps to add to my total. Still, a long, long way to go but with every step I also enjoy the companionship. And with every step, I also hope to raise a few more pounds.

If you would like to sponsor me then head to my Virgin Money Giving Page here , choose WaterAid or Moray Women’s Aid – and from the bottom of my heart, thank you.