Striding Out to the Arches

Posted on 5th August 2016 by onemillionbootsteps

So begins two days in the Scottish Lowlands. A little place called Thornhill in the stunning Leadhills area. It offers a range of walks and with the Southern Uplands Way passing right through, we had lots of choice. Kara is my walking buddy for a couple of days.

Kara has played football and been active, though by her own admission hasn’t done much exercise in a while so our walks would be selected to be not too testing for a “first time out in a while”. Criteria? Well signed and trodden paths only – the hills may be beautiful but also exposed and easy to go astray I would imagine. And ideally dry, not boggy on Day 1 – we each only have one pair of boots with us, and staying in a hotel where drying might be an issue. So over a G&T last night we threw out 50% of those we had printed and today we chose the Striding Arches. 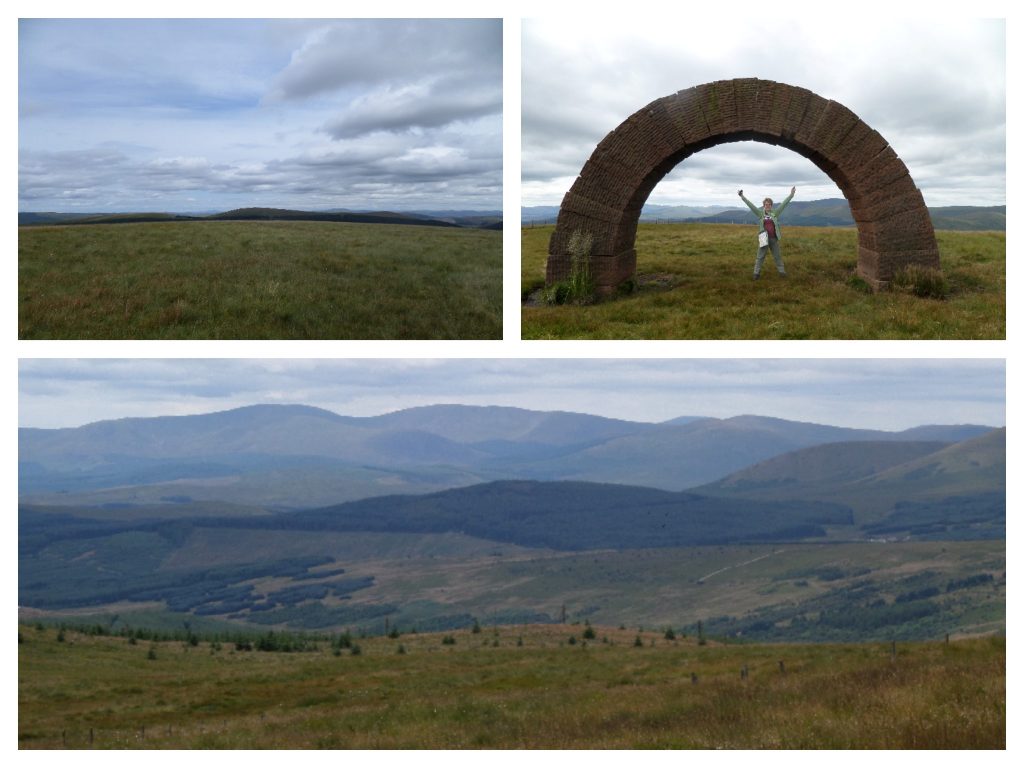 A total of 4 Andy Goldsworthy red sandstone arches – almost modern art. Each just under 4m high, 7m wide and made from approximately 31 blocks of hand dressed red sandstone. How on earth did they get them up here? You can read more about them here http://www.stridingarches.com/striding.html

The walk kicked off at 10am. A “bonus” arch is found close by at The Byre. Set in a pretty walled garden with stones carved with names of some of the past residents and carvings of a rural history – spade, a chicken, a scythe. The arch is in fact, half in, half out the Byre, exiting via an open window. “Someone must have got the setting out wrong”. Only an Engineer (me) would think that.

Then it was off up the forestry track to find arch No 1. Over burns and past beautiful waterfalls the track climbs until the signpost for directing you up Colt Hill. A sharp steep incline – so big girl pants on! Come on we can do this.

Stopping to breathe, stretch, take in the scenes we eventually emerged to the first remarkable structure. From here you can see Arch No 2 (on Benbrack) a way over in the distance. And if you look closely a 3rd is visible, though not accessible on foot, on Bail Hill. “So what do you reckon, go for Arch No 2?”. Well, its only 11:20am so ample time to at least get partway there. So that’s us back down to the track, across and up the other side. This arch is in fact another 7km and is reached by joining the Southern Upland Way for some considerable distance.

An “interesting” route. Does anyone see the waymarkers? Binoculars might have been helpful as we threaded our way up and down the undulating hills. If only to reassure ourselves the wet feet were worth it. Wet feet? Oh did I not mention? Boggy path all the way. I know, we could have abandoned the attempt quite early on. But I guess once your feet are wet then they are wet. The weather was still fair. Dry and cloudy but with a brightness. And the views were quite stunning. Both arches are a little under 600m high and once reached it really is worth the view.

So we pressed on. Onwards and upwards, past the pretty bog cotton blowing in the gentle breeze. There is a reason (and a clue) it’s called that I guess. So peaceful except for the occasional cry of a couple of crows – I swear they were laughing! And a pair of buzzards flying so close and low it reminds you how lucky we are in Scotland. We did wonder if they were circling in the hope we might simply collapse and die at the summit and thus keep them in carrion for weeks. Yes we were feeling the effects of having climbed over 500m.

Eventually, we reached the Benbrack arch and stopped for lunch. 1:20pm. From there it was a retrace of our steps – more bog squelching! And finally back to the car around 3:30pm. Fitbit stopped at 29,067 steps. An attempt at a selfie photo meant it refused to measure the distance, but an old fashioned measure says around 11.25 miles. Blimey, today was meant to be a gentle walk! Remember those criteria? No bogs, well trodden and set to meet our least fit walker. Well my boots are now hanging out the hotel window trying to dry and I am just praying I haven’t broken my walking buddy?.

It’s off to the bar now for a well earned G&T and get the map back out to choose something less strenuous for tomorrow – dry boots permitting.