Posted on 18th March 2017 by onemillionbootsteps 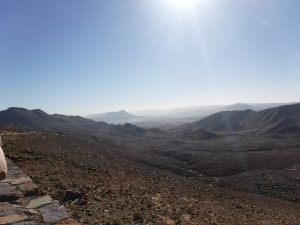 “Are you decent Rosie?”

Rosie is my roomy (and tent buddy) for the next week. We arrived at the Ibis in Oarzazate a little after midnight and after rearranging bags, rucksacks ready for an early departure we had both managed only a little fitful, excitement fuelled sleep. Eight very excited and nervous Trekkers had been up at 3am on the Thursday to fly from Inverness. The remaining two coming in from Aberdeen. We all ten would unite, alongside our Trek Doctor Neal at Heathrow. So I was now almost three days without no more than perhaps five or six hours of real deep sleep. Not the best preparation for what was to come but the adrenalin would see us through the six to seven hour drive into the Sahara today.

“Yes I am ready”. I throw the curtains wide open and there it is. Morocco in all it’s glory. The sun is up, we can see the mountains. Wow! It’s real, it’s happening! 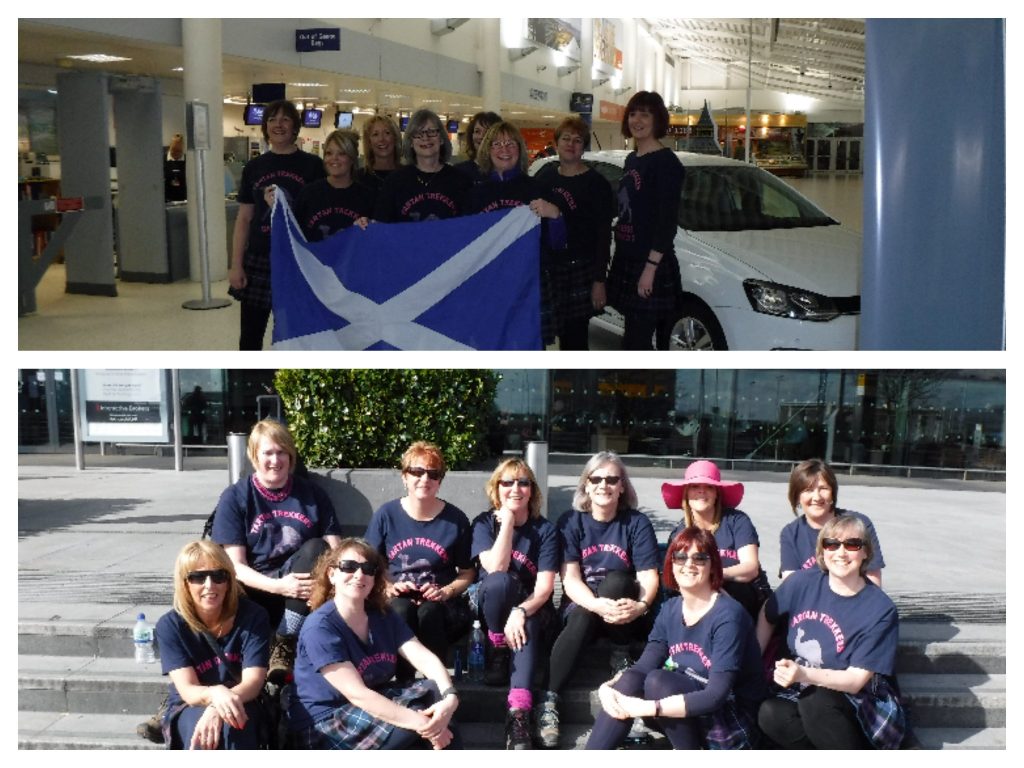 A swift breakfast followed. I am not hungry early morning at the best of times so I was only able to force a little something down. We were to travel to our start point today so attire would need to be comfortable for the drive and “walk” ready. Now that in itself is worth a few words. I loved the outfit choices that morning. You see, I for one had no prior knowledge of what it would “feel” like as we began to walk. I had packed for hot days, and also for cooler evenings. My trusty Tilly hat and safari shorts and skorts would be my staple wardrobe. And I guess most would have had the same thought processes as they packed. Kirsty summed it up in one saying “what do we look like? Kirsty rocked up looking like she was on a gap year. Meanwhile Pauline looks like she’s off to Benidorm”. And that is exactly what I love about these women. The colourful characters I would share this experience with. We are all individuals. And like the choice of our wardrobes, we would each bring different strengths to the challenge. Humour, kindness, care, empathy, emotion, pragmatism, “can do, will do”. In some we would see their strengths become their weakness too. This was going to be amazing, I could see it, through my sleep deprived eyes :). I could feel it with every bone in my travel weary body. 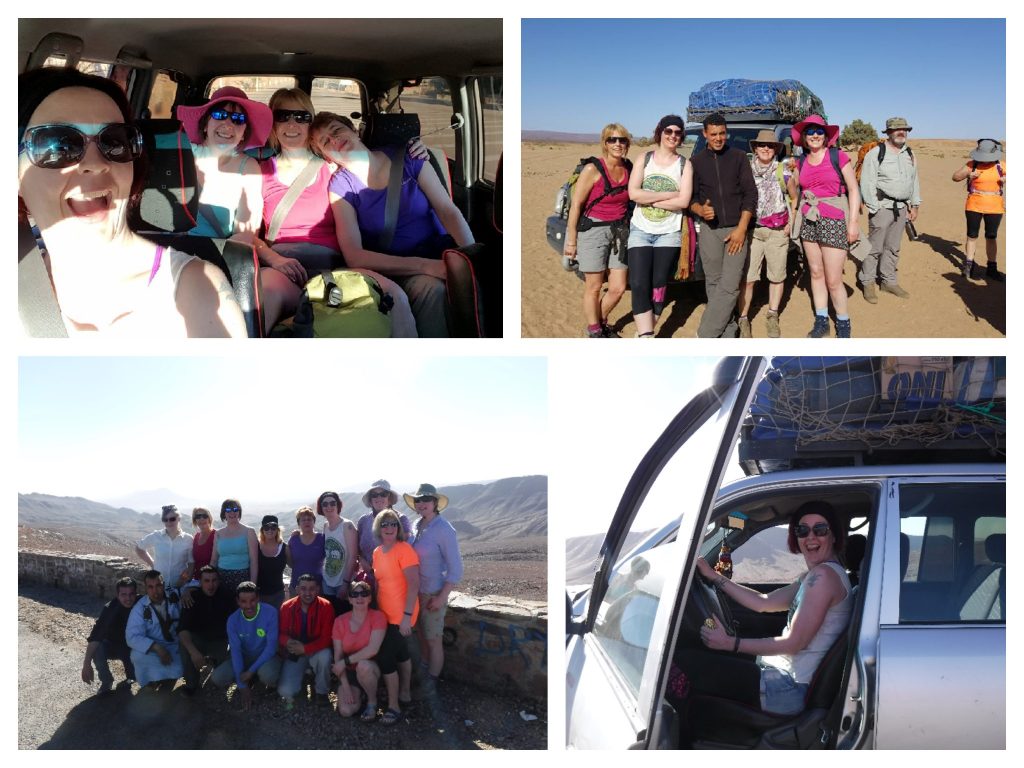 Then it was time to load up the vehicles – three 4×4’s would take the Trekkers in. Led by Mstapha our guide from Maroc Nature and we managed to even squeeze Omar our camp cook for the week in somehow too. A briefing with map laid on the bonnet of the car and it’s time. My tummy might as well have been Butterfly World with the fluttering going on in there.

Kirsty, Rosie, Pauline and I piled into Rachid’s car and then the convoy left the hotel. Rachid spoke little English, only Arabic and French. We on the other hand spoke little of either. Leaving Oarzazate, stopping at least once en route to collect provisions. Trays of eggs came out – those eggs would prove to be a talking point well after the last walk step was taken. Bags of oranges and clementines. Potatoes. And hobs! With a laugh Mstafa describes all Moroccans as “Hobsivores”. It took a wee while for the link to be made….herbivores, carnivores, omnivores, “hobsivores!”. Hobs hobs! Comes with every meal. Actually the Arabic word is khubz – which is bread to you and I. The smell of fresh baked bread wafting through our vehicle was just divine. 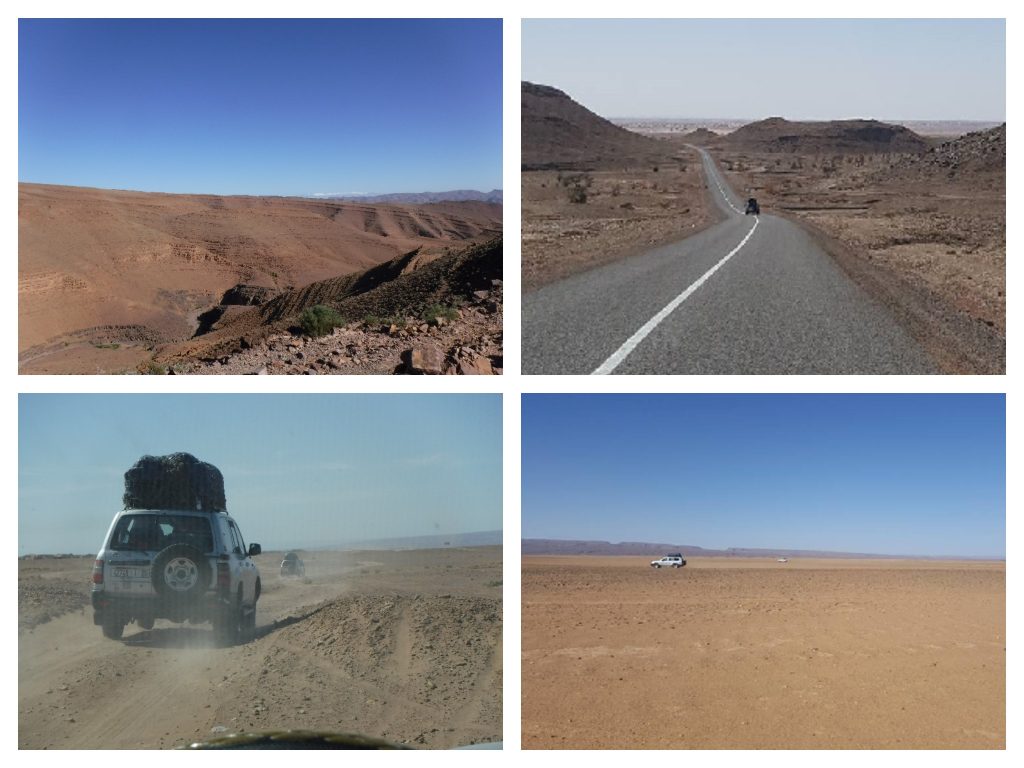 But what followed next is something I still find hard to describe without the heart beating a little faster. A journey filled with laughter and song. Music, humour and good company bridges all language barriers.

I can honestly say nothing prepared me for the drive to the start of our trek. We drove over mountain roads, through villages and towns. Watched children play by the roadside, waving to any passing vehicles with westerners on board. We saw the schools empty and children heading home. In droves and also in ones and twos across the rocky mountainside towards home. We experienced hairy overtaking manoeuvres. Everything from large trucks to donkeys for transport. We also passed hundreds if not thousands of Fiat Pandas taking part in a leg of the Panda Raid over the mountain passes.

We stopped for hot mint tea. A deep flavoursome tea, poured over fresh mint sprigs and finished with a sugar cube. Accompanied by plates of nuts, dried fruits and pastries. A combination known as trail mix which would become a welcome daily energy stop on our trek days. Back in the car and we continue on.

Lunch was alfresco. Warm roast spicy chicken, tomaotoes, onions, olives. And “Hobs”! Delicious and all quickly rustled up under a tree by the whole Maroc Nature team. One preparing while another heads to the nearby well to get water to load up for camp.  This was our first opportunity to really appreciate the heat. Just over two hours and we would be walking in these high temperatures. Arrghh! 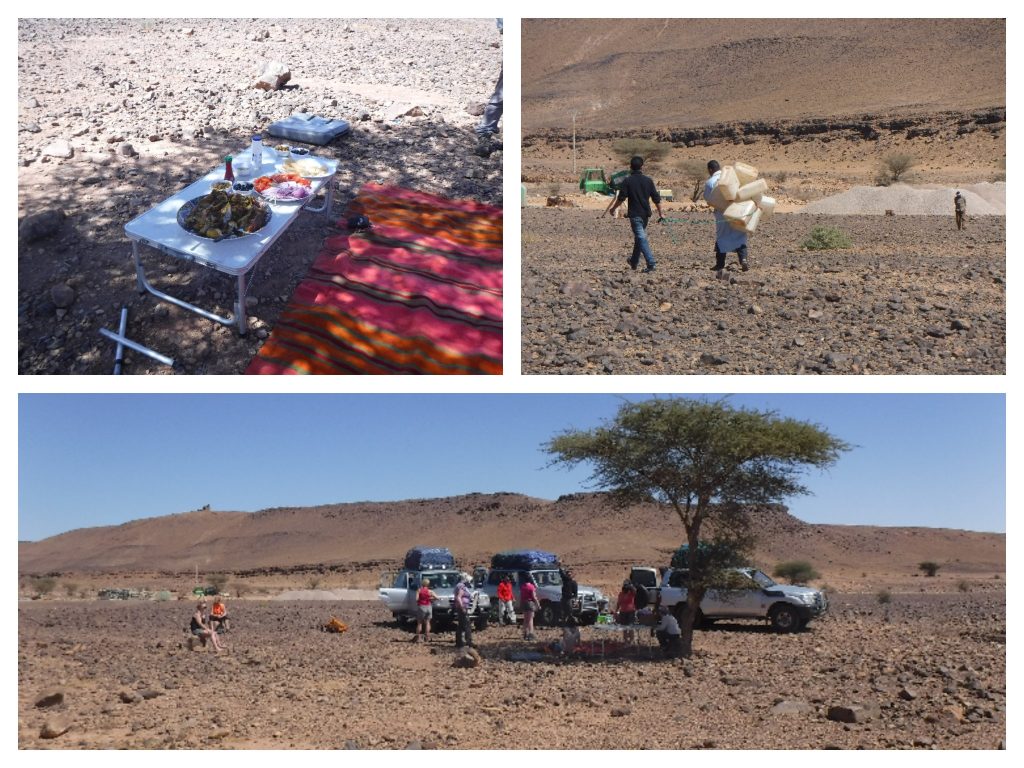 Soon we were back on the road. And then the three cars fanned out across the plains towards our final destination. Criss-crossing each other kicking up dust. Over the bumps – “The eggs!!The eggs!!” we shout.  It surely doesn’t get any better than this? We could see sand now, lots. I scanned the horizon hoping, yet at the same time not hoping, for that first glimpse of the camel men and camels. I look across to the other cars and faces which had snoozed until now were seen beaming across. I think those butterflies were having a party in my belly now. NOW it’s real. NOW it’s happening. Happening to me! I have lost count of how many times I have said that this week, but only now is it really sinking in.

And then suddenly we see him. Ahmed stood alongside a single camel. As the vehicles approach Kirsty tries a “Can I drive?” and the car comes to a stop. Rachid is letting her drive! Wow, well that’s the first “I want to…” experience ticked off.

But now it was down to the serious business. The real reason we came here. To walk! 100 km in this heat. We disembark, load up with water, hats on, rucksacks on, say Farewell to our drivers and then we begin. Slowly settling in behind the camel. The pace is a lot slower than we have trained for, so unlike the days when we spread out into different groups we find ourselves alongside the camel. Mstapha chats with a few of us, takes time to learn about our cause, our group, our training. He teaches us to climb the dunes with short slow steady steps.

We stop and take in the little things. The scarab beetle, the geckos and lizards, the footprints of the sand fox. We scale our first dune and he explains the lie of the land, helps us set some land marks for the days ahead. Ahmed takes “Bert” (ok, we nicknamed him) around the base of the dune for a fabulous photo opportunity. The light at this time of the day is pretty special. We stop along the way to find Lahcen giving a nomad display of tea making over a small camp fire before being joined by Ahmed now leading four camels. Approximately two hours later and we can see camp ahead. Just time to erect our tents with help from the entire team and get our kit ready for tomorrow. 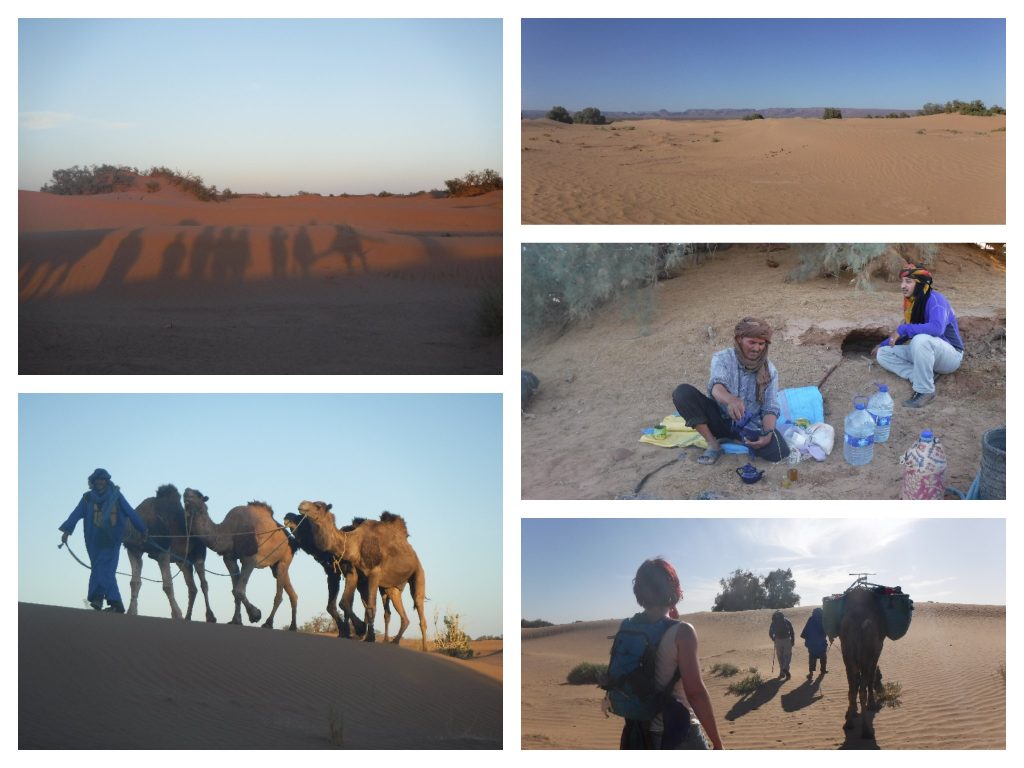 Dinner is a Moroccan Soup followed by vegetable tagine with a dish of beef. Served in a mess tent, shoes off, seated on rugs around one large table. A piece of fruit followed by a relaxing verbena tea to help us sleep. A time to reflect on the day and ask about tomorrow. “Tomorrow? Tomorrow is another day :)”.

It is still extremely warm as we turn in for the night. It would take until Day 4 before I actually slept inside my sleeping bag :).

9886 steps completed today. 991418 steps overall and I know tomorrow the millionth boot step will be taken. The best thing though was a comment passed which was our guide thought us to be the most prepared group he had seen. We have worked, walked and played hard – and we are a team. So that is a massive boost going into the next four days.

Thanks Kirsty (Kaj) Johnston for the use of some of her images. See – even the photo album was a team effort 😉