Not one walk but four

Posted on 4th August 2016 by onemillionbootsteps

Day 2 in the Lowlands dawned bright. A good nights sleep and a good breakfast and we were ready to try a few more steps. Nothing too strenuous – no really. I know we have said it before but today we meant it. We both have considerable drives tomorrow – doing it with a bad back, hip, knee, hamstring, calf (yes these were all squeaking this morning) would not make for a pleasant journey home. So we elected to do a local walk from Drumlanrig Castle, nice and flat, and see how far we get.

It was a later start as we decided to put something back into the local economy with a little shopping (while we were still relatively mudless and alert). Then it was off to the castle.

The castle normally charges entry for access to their grounds. But after explaining we had come simply to walk we were handed a map, waved on with “have a nice day girls”. Girls? Well I will take that, thank you. A quick look at said map revealed a heap of way marked routes taking in lots of lovely scenery. So a rapid change of plan and today’s challenge was now to complete every walk route! 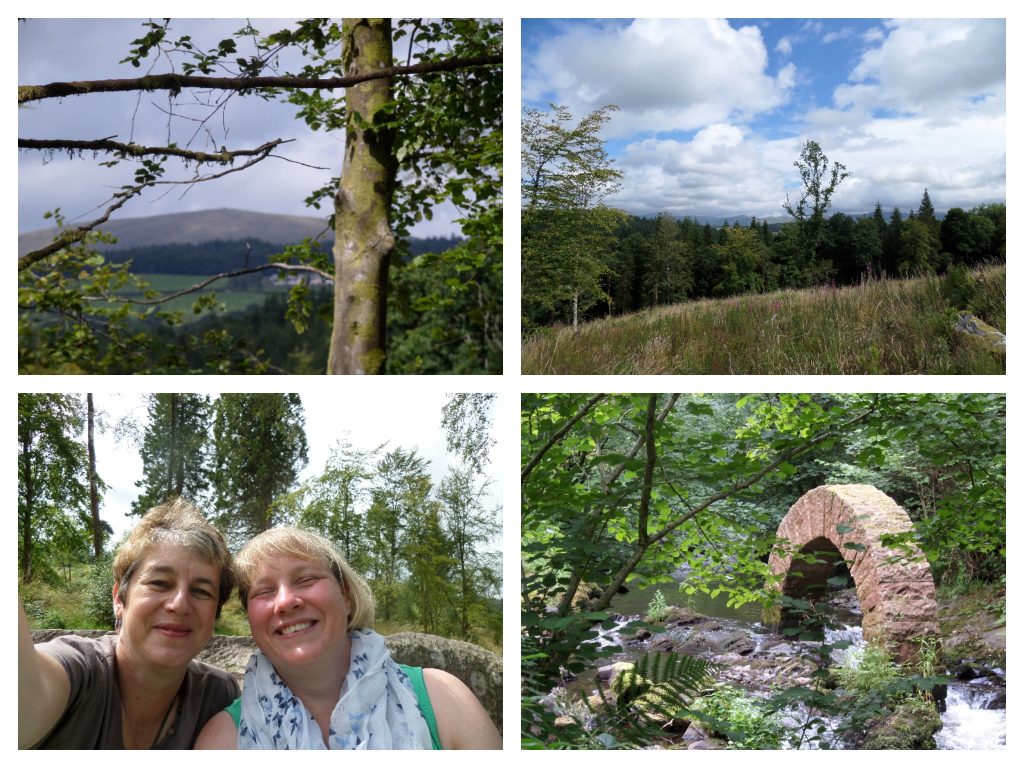 First route, the green route is described as the most strenuous. It begins at a leisurely pace, lulling you into a false sense of security, alongside Druids Loch literally covered in lily pads. It then begins to rise, feel those calves tighten, and those thigh muscles burn. It heads on and up to Mount Malloch giving stunning views down onto Drumlanrig Castle and across to the Lowther Hills beyond. This route holds special memories for me as we came here some years ago with our old Labrador Megan who managed this walk to the top. We were so proud of her as she was getting on in years. It’s fair to say she slept well that night.

A very convenient and welcome stone “sofa” awaits you when you finally reach the crest. And a quick scan of the horizon revealed (we think) one of the summits climbed yesterday with the arch on top. Did we really go up there yesterday. Awesome! The sun was out, the jackets were off. Beautiful. This is also the longest route and ended with a relaxed lunch stop before joining the Blue route.

This is known as the watery walk as it follows the route of the Marr Burn and eventually crosses to reveal a surprise! Another Andy Goldsworthy sandstone arch. It got me thinking how this trend would benefit my Glenlivet region, drawing tourists to areas which may otherwise lie untouched and never visited.

Then it was time to pick up the purple route, through beautiful broad-leaved woodland and following Coldsteam Burn over the Montagu Bridge, past Beech Loch eventually, briefly heading into fields. It was here we met a family, exchanged some good humour, shared my story about a Million Boot Steps, before returning to the car park. 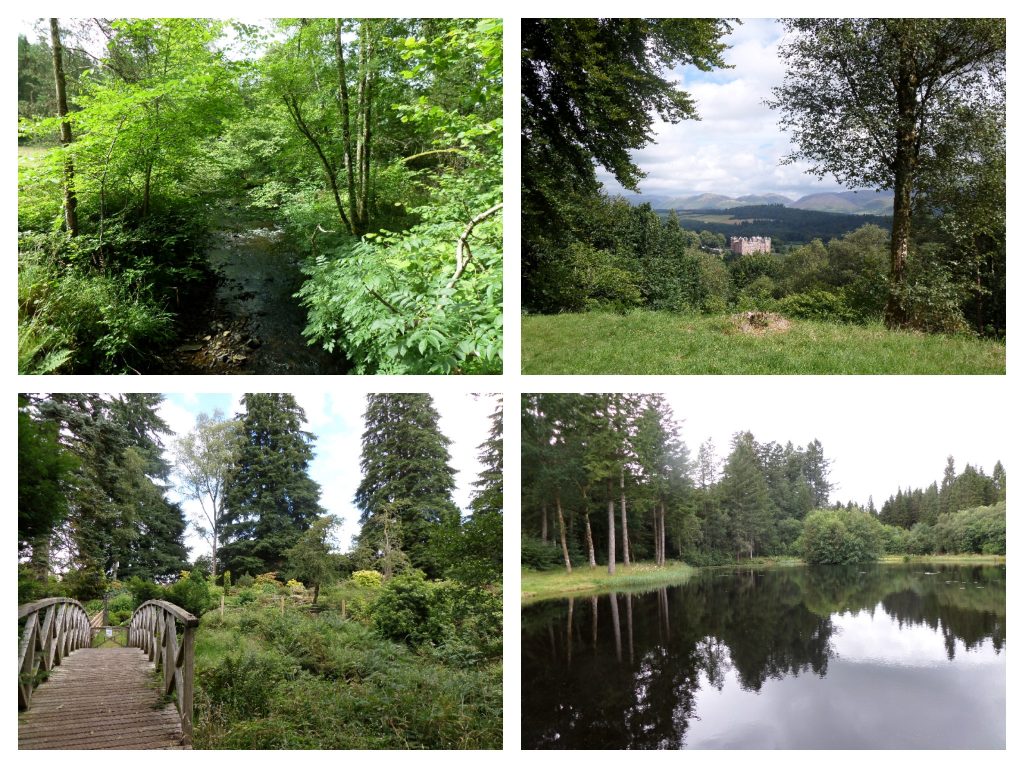 A brief comfort stop and the last route was in sight. The shortest and we discovered most loved by children as “Terence the Pixie” leaves notes about nature for a nature trail. Oh to be a child again – instead I settled for completing this route with an ice cream.

Back at the car park and today’s steps amount to 19,713. The location might not be a mountain or indeed represent a challenging distance. By far the biggest challenge today was the self-motivation to “get up and walk again” while feeling stiff and tired. When you first begin to climb again, your whole body starts to scream “not again!” and three routes in I could easily have abandoned the fourth in favour of tea and a scone in the tearoom.

But that’s the beauty of walking as two…and with someone who was also feeling proud of the distance we had covered in two days. As we drove back to the hotel she said “I really feel as if I have been part of your challenge – and now I know you really are doing some really challenging stuff”. Thank you Kara for being my walking buddy for the last two days. You did amazing!

Total steps to date are now sitting tantalisingly close to 300,000. How many dog walks up the “killer” hill from the Gallowhill will it take to get reach that milestone before the biggest challenge by far, Lochnagar, next weekend?